#1
For anyone who might be interested, a group of us have been reinjected with the Call of Duty disease. We have already played Call of Duty Black Ops on Wii, Call of Duty Ghost and Black Ops 2 on Wii U. Call of Duty Mondays will consist of playing games of the series on Wii and Wii U. If you are interested in joining in, feel free to join us on the Game Witness channel on the Discord app available for all mobile devices. The plan is to play every Monday night around 8:30 eastern time. This will continue as long as there is interest, so the more people who join in the longer it is likely to continue.

Next up will be COD Modern Warfare Reflex on Monday May 6th.

The current regulars consist of @Karkashan @EvilTw1n @Juegos and myself.

Perhaps old players such as @mattavelle1 @Koenig might consider plopping down the "2.99" is will cost to buy back into the Call of Duty illness.

Moderator
#2
Right now in all honesty Iâ€™ve just been to busy. I donâ€™t mean that as in Iâ€™m working every night, but I went to stop by the other night and boom got a phone call at night from a customer that took an hour.

Moderator
#3
So I goofed and forgot that this coming Monday, I'll probably be out. But I should hopefully be on regularly after that.

To anyone who dropped COD because it used to piss you off, I feel your pain. But believe it or not, only playing the game once a week for an hour or two does wonders for mitigating the salt factor.

Moderator
#4
Alright, I played a few rounds of COD4 with GT last night. It's been a long time since I played this one. Three observations:

-This was Treyarch's first attempt at IR controls with this many customization options (although I now want to pick up [email protected] to see how comprehensive its presets were), and although the Wii had been out for like 2.5 years, it still wasn't all the way there. It's compounded by the wandering hit box issue. You can really tell this was a development challenge; [email protected] was their own thing, but with Reflex, Treyarch was porting an IW game without IW giving a damn.

-Brown/grey shooter syndrome didn't start here, but this was like the iPhone moment for that aesthetic. Everyone copied it. All the maps look too similar...

-...but all of the map layout is the best stuff that was ever in COD. I don't know what magic sauce was on this, but damn it's good.

#5
Map layout is very good in MW, but as a new player to the game, it won't make learning the layouts any easier.

Hit markers are a big step back from Black Ops and MW3 on Wii. No rumble or satisfying audio cues to let you know your landing shots. Made worse by sketch hit boxes.

Visually its easy to see this was Treyarch learning how to downport a game to Wii. They made significant strides with porting the following two games to Wii. Black Ops and MW3 are head head and shoulders above MW graphically.

I have about four hours into the single player. So far I like it. Nothing mind blowing, but pretty good just the same.

Moderator
#6
MW3 never on Wii or Wii U did I miss something?

#7
FriedShoes said:
MW3 never on Wii or Wii U did I miss something?
Click to expand... 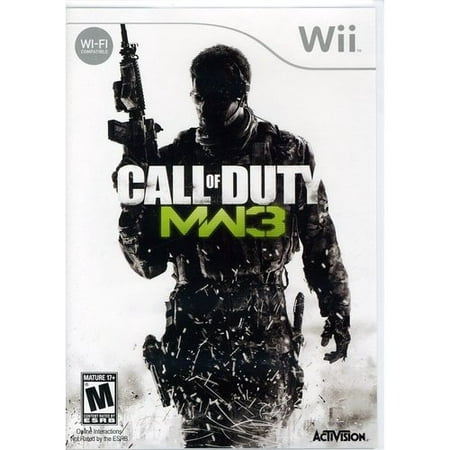 It was on Wii, I remember playing quit a bit of it, and quiting when my account got hacked and tech support could do nothing to nothing to re-unlock my weapons and gear. I loved the gameplay more than the others, but did not like the maps compared to CoD4.

Moderator
#10
FriedShoes said:
That's fucking insane THATS INSANE WHAT
Click to expand...
Maybe you were thinking of Modern Warfare 2? That is the only one that skipped a Nintendo release at that time.

(Also...why the hell Activision hasn't put out the COD4 remaster on Switch only makes sense to Activision. Panic Button could port that in a cave with spare parts.)

Moderator
#11
EvilTw1n said:
Maybe you were thinking of Modern Warfare 2? That is the only one that skipped a Nintendo release at that time.

(Also...why the hell Activision hasn't put out the COD4 remaster on Switch only makes sense to Activision. Panic Button could port that in a cave with spare parts.)
Click to expand...
Probably. It's insane that 2 skipped Wii but not 3, and then on top of that MW3 not even being in the picture for Wii U. Absolutely insane.

#12
To be fair, I am pretty sure Treyarc is the only reason MW3 made it to Wii. It looks like infinity ward had no interest in porting their game over, and they had just released MW2 when Treyarc was working on Reflex, so it made sense (at least to activision) to have ttreyarc work on the wii version of MW3 at the same time it was in development and skip MW2. Meanwhile by the time the Wii U came out, Black Ops II was the next in development, and treyarc were the ones developing it so they did not have a studio to go back and do MW3 or MW2 again.

Still dumb that none of them are on switch now though. I have money I am willing to pay and Activision does not want it.

Moderator
#14
Btw IR aim is butt. I'm a god player, y'all know this, but it's impossible in this game, especially with the netcode or whatever it's on. Evidence will be posted

#16
Still looks damn good...Why the hell isn't it and its sequels on switch?

Moderator
#17
FriedShoes said:
Probably. It's insane that 2 skipped Wii but not 3, and then on top of that MW3 not even being in the picture for Wii U. Absolutely insane.
Click to expand...
Just a matter of timing. IW never wanted to work on Wii. It wasn't "cinematic" enough. So COD4 skipped Wii initially in 2007. Then Treyarch did [email protected] in 2008. In 2009, since IW refused to do anything for Wii while they were making MW2, it fell to Treyarch. IW was in the West-Zampella era and weren't sharing development duty for their new game. So the only thing that was handy was 2 year old code for COD4.

There was an old Treyarch dev who used to post at GAF and GameFaqs. They said that when Reflex was first up and running on Wii, it was at like 5 fps. They could get the game up to 30 if they had Star Fox-level graphics. Good times. That's how much optimization it took.

FriedShoes said:
Btw IR aim is butt. I'm a god player, y'all know this, but it's impossible in this game, especially with the netcode or whatever it's on. Evidence will be posted
Click to expand...
There's an issue with the hit boxes lagging and synching. Alas, this was before patching bugs was a thing for third parties on Nintendo consoles.

I do recommend moving the sensor bar closer to you, though (or just sit closer to it). IR can feel pretty squirrelly if you're too far away. Then you can sort out the rest.

#18
I wish i had some of the treyarc devs who ported CoD4 as a teacher. I am sure i could learn a lot about optimization from them.

Moderator
#19
Koenig said:
I wish i had some of the treyarc devs who ported CoD4 as a teacher. I am sure i could learn a lot about optimization from them.
Click to expand...
@Goodtwin said on more than one occasion that for Wii-era Nintendo hardware, the best non-Nintendo dev was Treyarch by a not-particularly-close margin. No one was in the same ballpark to doing what they did. Even seeing what Panic Button has done now isn't as impressive as what Treyarch did then.

Of course, their optimization expertise is now quite out of date (at least for the purpose of this discussion). I can't find the link now, but someone did a comparison to make it less apples and oranges, as a yardstick for where the Wii's OpenGL API was equivalent to whatever iteration of DirectX...and it was not flattering. Treyarch's Wii ports were more in the spirit of the "impossible ports" of old: DOOM on the SNES, Quake on the Saturn, even SFIV on 3DS (or the ports that never quite were). It was tearing apart a game to rebuild it, not having a modern scalable engine with dynamic resolution scaling.

Wii COD was a scene, man. Last stand of the truly impossible.

#20
MW Reflex, Black Ops, and MW3 were more akin to rebuilds than ports. I remember seeing some developer comments about the game running at a few frames per second when they first got it running. They perfected their craft over the years. MW3 is far superior to Reflex in terms of visuals. I remember playing the jungle map in Black Ops for the first time, I had never seen a game on Wii level hardware with that much foliage.

One of the tricks that Treyarch did was to implement transgressive streaming system, making the disk drive work overtime. This is why some kill streaks were removed, the maps were not being entirely rendered into memory, but instead streamed in new assets on the fly. If Treyarch had not done this, the limits of 88MB of system memory would have forced them to reduce model quality, texture quality, and character animations.

#21
Interesting enough, some of the "removed" kill streaks were actually still in the game. I ran into a few hacked lobbies that replaced everyones payload with them, and they fun, alebit broken. The missile in particular was very hard to use, as it started far above the map, making it impossible for the wii to actually load the graphics in before your missile would hit the ground, meaning you would usually hit an invisible roof rather than actually hit the player you were aiming for.

#22
That's pretty neat though, those hacks allowed you to see just how much of the map was constantly being streamed in and out of memory.

#23
Although I am pretty sure that streaming trick is what killed my Wii's disc reader 4 times over. That thing was chugging nonstop when I played, and I played all the time.

Definitely wanna try out some more Private Match custom scenarios, as well. (heck, if we could organize our own, full lobby we could play shit like Domination or Sabotage or whatever else we wanted. A pipe dream, I realize, but still, it'd be cool)

#26
Goodtwin said:
@Karkashan did you make a post at IGN?
Click to expand...
No I did not. I completely forgot, tbh.

#27
In a couple weeks, the plan is to play COD Ghost Extinction. Next week will probably be Black Ops 2. Might move next weeks COD night to Tuesday with Monday being the holiday.

#28
Black Ops on Wii tonight at 9pm eastern time. Join us on the Game Witness channel on Discord if your game.

That night was not tonight, however.

#31
Last night was fun, ya'll. Shoutout to GT and ET helping me snatch that FFA win from Fried (even if it wasn't intentional)

Perhaps Discord will work again someday so we don't have to have some wonky set up with my head attached to headphones, attached to a gamepad that I'm not using because I used the Pro controller.
J