THE OFFICIAL BOARD and CARD GAME ENTHUSIAST THREAD!

​
I'm SORRY but I'm going to take a RISK posting about board games on a forum which thinks that the idea of playing a game should require a screen and controller but I think that's BALDERDASH! So, if you have a CLUE about gaming you know that there is more to LIFE than huddling around a tv screen. So what if you have to CONNECT FOUR or more people in real life for most games? It used to be no TROUBLE to participate in that sort of OPERATION but nowadays the internet has gotten it into our CRANIUM that having a group of friends together to play CARDS is somehow AGAINST our innate HUMANITY. So, as you come into this thread SAY ANYTHING and DON'T forget to BREAK THE ICE regarding fun times you had playing games, fights with family, and introducing others in this thread about the MAGIC you've experienced whilst in the TRIVIAL PURSUIT of the perfect board game! So, do not pass go, do not collect $200 but sit a spell (or 8 hours as some games require) and let us know about the contemporary TABOO that is playing board games.

#3
Now, I initially made this thread because I had to tell y'all about one of the best board games I've played. Risk Legacy.

That's right, there is a techno-viking Wolverine attacking a mother trucking mech on the cover!​
So essentially the game is RISK. The way you attack remains mostly the same, the way you get more troops mostly stays the same, but after that its all different. In fact, its constantly fluctuating.

The story behind the game is that essentially Earth has been tapped out in the resource department. So we figured out how to make new Earth. To move to this new Earth and get resources you have to basically agree to "Totes get a long and whatnot!" but within 2 months poo hits the fan.

...or cat. ​
So, you start the game by posting a headquarters which acts as a sort of spawn point for your characters and you branch out. This hurt my head because I'm used to seeing everything completely full on a Risk board. There was a vast nothingness waiting to be explored.
Before you put down your headquarters you choose factions that have various perks/disadvantages.

AKA - Alpha Nazi's, Techno Viking Wolverines, Dick Cheney's Bodyguards, Your Very Own Robo-Cop Maker Machine, and Anthropomorphized Jawas. ​
Each faction can choose one out of two powers. You actually place stickers on the cards of your chosen faction AND THROW THE OTHER POWER AWAY! This actually was a major point of contention in the group. You just don't throw away board game pieces. It's unheard of...

"Keep it anyway!"​
So the powers were interesting. For instance if I were to attack then roll the dice and happen to get all the numbers the same (3,3,3) then BAM insta-kill and takeover the entire country. That is mindblowing to me. I could literally attack with 3 people to a country with 50 and have a slight chance of an insta-win situation. Another team I fought against had a +1 modifier to all dice rolls when his Headquarters were being attack. Anyway the theme of this game is that the rules change and what you do to the game leaves somewhat permanent repercussions too!

There are these things called "Scars" which essentially create disadvantages on the battlefield. For instance, when I attacked the Middle East in the game I put down a "Ammo Shortage" scar which caused the defender to have a -1 roll on his dice. Initially I de-stabilized the Middle East...

Well, to win the game you don't quite just take everyone over. You have to get 4 stars. You can get them by turning in 4 resource cards or taking over headquarters. Its a good time and the games go relatively quick. We finished the first one in 2 hours. Winning is more fun than it should be...

Especially when you see things like this...​
When you win you have to participate in a couple of activities. First you write your name down as the first winner, write the date, and even a quote, trash talk, or whatever you want really. You write it down with a permanent marker. It's on the gameboard forever!

Choose wisely.
​
Now. You also can name your own continent (giving you +1 troop per turn if you take it over), found a major city (which gives you +2 population and makes it where only you can put a headquarters there...ever.), buff or debuff continents, or some other things that work later in the game(s).

If you lose you can found a minor city and name it. I chose to start a city called "Lemurville" in Madagascar. In my village everyone must wear funny hats and break into dance when our national anthem plays, 'MOVE IT, MOVE IT!"

"DANCE NOW!"​
So, honestly this is not so much a review as it is sort of a preview. The game has only begun. There are actually packs of cards and directions we haven't broken into because they require some sort of achievement to open said goodies. Seriously...how can you not want to break into all this stuff in the box?!? 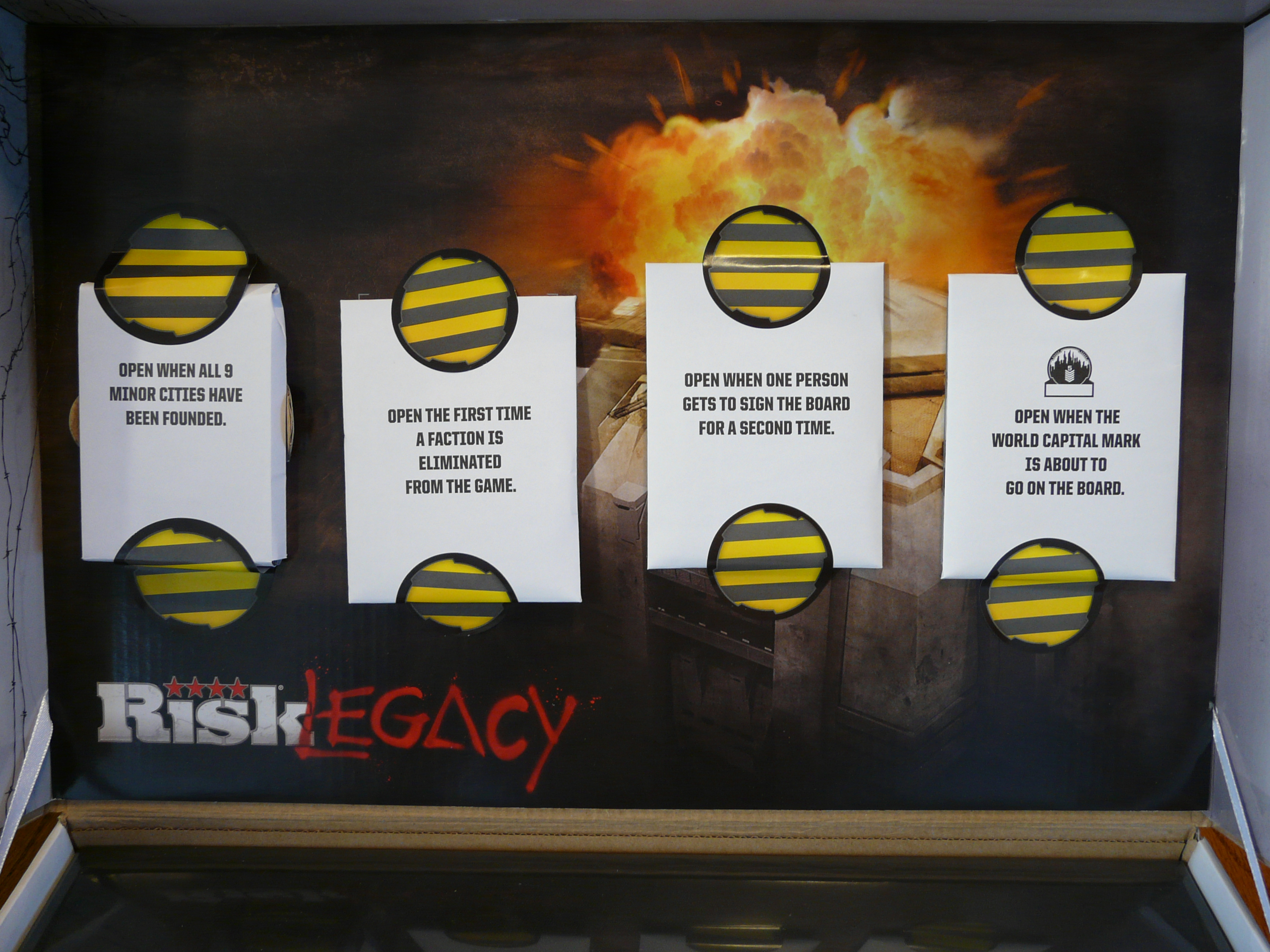 These are just some of the things that you get to break into later...
​
So, if you get a chance and have or more people to play this game with, pick this stuff up. Everyone I played with went from being sort of meh feeling about the game, to mild fear/excitement, to really wanting to rip into the second game. So far this game looks to be one of my favorite board game experiences ever. I'll update after future games.

Moderator
#4
I have played exactly one game of Risk. It was fantastic. Just don't have anyone around me who would wanna play.

You can't beat Monopoly, though. Especially when you're the banker and cheat.

#5
I remember when I played The Game of Life, and lost. I determined at that point I suck at Life.

But seriously though, I like a good board game, because t the only ones I remember ever playing were Life, Monopoly, Star Wars Monopoly, and Risk. Good times, though. 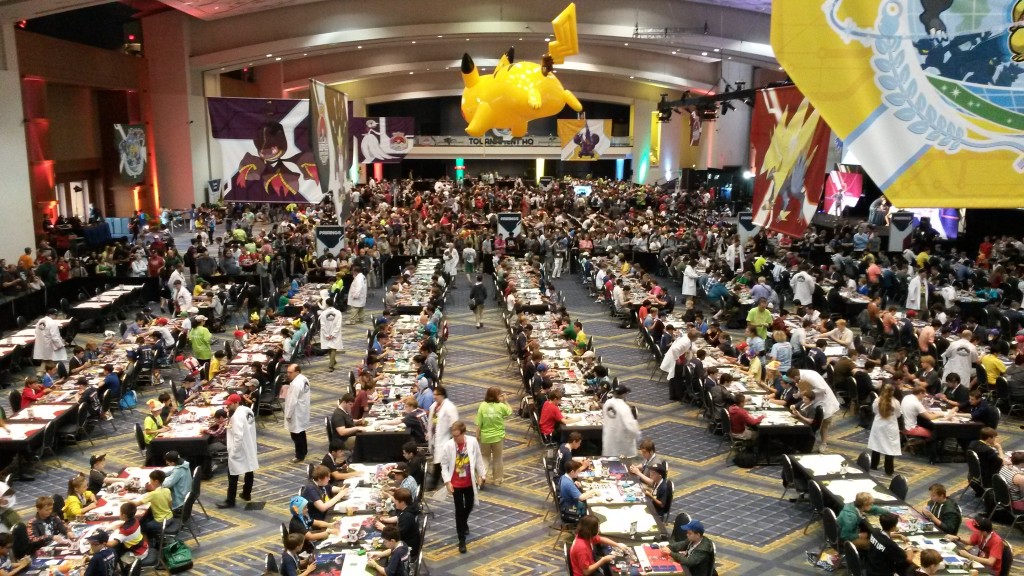 #7
It's not a board game either, but my new gaming obsession is "Exploding Kittens"