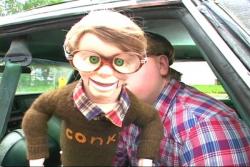 #1
When people think of Fire Emblem
they conjure images of handsome blue haired heroes tactically prevailing over
an assortment of massive armies and obstacles. This is an accurate assumption
for old and new players, but thereâ€™s a huge level of hidden subtle
social-political commentary hidden within the games. Here, I will list three
elements or special messages that I have picked up on as a long-time player of
this series.

1. This
series takes just war theory to logical extremes. The fact that most games
debut with you fighting bandits immune to rational conversation accentuates the
idea that the world is in shambles. In most games, there is always a clear
perpetrator or aggressor that needs to be stopped, which is the core component
of just war theory. Most wars do not have an established aggressor and
determining who the aggressor is a matter of huge dispute. Another issue that
delegitimizes the justification of most conflicts is the fact the competing
sides might both have valid reasons for fighting which makes instituting proper
intervention difficult. None of the Fire Emblem Lords/protagonists instigate
the conflict but they do eventually play a pivotal role in bringing the
conflict to a close. The clearest example of just war theory and
evil empire syndrome is the Grandbell Empire in Genealogy of the Holy War. Itâ€™s
located right in the geographic centre of the world map and as you progress
through the game you will see it devour/conquer most of the known world. The
fact that the Grandbell empire is controlled by an evil cult that hunts
children forces characters and citizens of various nations to forget their old
prejudices and work together to stop this threat.


1. Not
all of the friends you make in your journey through a Fire Emblem game bears
the same sort of dress, speech and other homogenous Eurocentric features. The
notable standouts in every Fire Emblem game are the myrmidon/swordmaster that
are always shone wearing a tunic and represent the stranger in strange land
anti-hero. Many of them switch over to
the players side because of a womenâ€™s words. While this may appear humorous at
first glance it also demonstrates that the swordmaster is tired of all ideological
ists and isms of the world that harm and oppress people. Characters like
Navarre join your side because they are tired and angry at the way people get
treated, not just women. The fan-favourite swordmaster, Rutger expounds the
idea of racial harmony that a big chunk of the world sorely lacks. Rutger is of
mixed heritage and the fact that looked more like a citizen of Bern than Sacae
is why he was able to live as well as fight another day. The nation of Sacae bears a strong
resemblance to Scythia, an ancient civilization with confusing origins. Its
largest city is named Bulgar which of course resembles Bulgaria. Rutger embodies the â€œmessy middleâ€ part of
the world which stretches from the former Yugoslavia to Mongolia where notions
of race, history and language can be confusing. I once knew an employee named
Vlad who was â€œorientalâ€ looking but bore a thick Russian sounding accent. For
those unfamiliar with the GBA games, the Laguz-Beorc relationship in Path of
Radiance and Radiant Dawn is a much clearer message of peace among nations and
ethnicities.


1. 3.Apologizing for sins of the homeland


The
The last core component Iâ€™m willing to discuss is by far the haziest due to
cultural barriers and my limited understanding of Japanese culture. Based on
the political code I have read in the games, I suspect that this series is a
critique on Fascism. Japan along with Germany and Italy comprised the Axis
powers during the Second World War. All three empires expanded rapidly and were
crushed by war. My definition of Fascism is a hybrid of extreme nationalism,
totalitarianism and a nostalgic hold on ancient values of militarism. Most
antagonists in the games possess a â€œmight is right,â€ ethos especially Mad King
Ashnard. What prevails over the antagonists in each game is in my analysis not
some young naÃ¯ve blue haired hero, but the politics of modernity. By modernity
I refer to constitutional law, mutual respect for others and the use of consultation
to settle arguments. When I achieve victory in a Fire Emblem game I donâ€™t just
see characters being able to settle down, rather I see the triumph of the rule
of law.

#2
I'm not sure what happened, but your post is all fucked up. Good idea for a thread.
In Path of Radiance, "the most powerful should be the ones who rule" is a strong theme.

We as a society must outgrow it.

Humans get violent when their way of life is destroyed. We revert to our most basic pre-set condition.

If you want to give a terrorist, peace, you must give them stability.

But life is never about stability, so it is our goal as a essential whole to give people the tools to adapt to an ever changing circumstance.

When it comes to the future you can accept it and change with it, or you can work together to correct that course of self destruction.


But there are people who revel in instability, they are clinically mad, lost people.

Society came up with a word for them. "Evil."

Humans are stupid. As our way of thinking changes, the old way's become barbaric in our collective shame and they too become relics of a by gone era.

But how we treat out land is an admission of our own propensity to sabotage. We sabotage ourselves out of fear.

In thus we are beholden to our own emotions rather than our emotions being tools we wield in our daily passage of rite, in life.

#4
^that was an absolutely beautiful post. It reminds me of some university essays I had to read regarding war and peace. I recall an article that described how war like jousting was becoming passe.

#5
Mhm, even though I recognize it as such, people still cant seem to get out the loop of inferiority and superiority.